To create your account press the registration form. Pay with Visa, MasterCard or American Express. 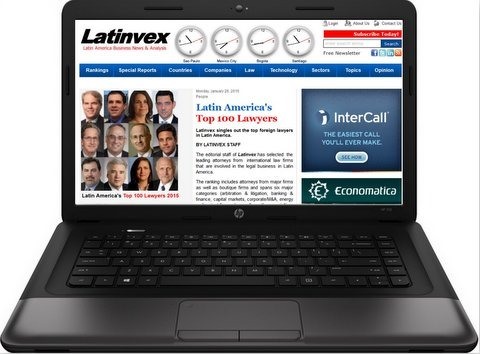 Joachim Bamrud, the editor-in-chief, is an award-winning journalist who has covered Latin America for various media, including Reuters, The Economist, Economist Intelligence Unit, Global Finance, MiningWeekly and The Miami Herald. Bamrud, a former editor-in-chief of Latin Trade and Latin Business Chronicle, has been interviewed by various media, including Time, CNN, Fox News and Financial Times. He is a frequent speaker on Latin America for companies, chambers and government entities, including Baker & McKenzie, Microsoft, Emerson, Employers Reinsurance, SCOR Reinsurance, US Southern Command, Business Software Alliance, American Chamber of Commerce in Panama, European Chambers of Commerce in Miami, Churchill Club in San Francisco and World Affairs Council of Houston.
He is also the author of the international action thriller Panama Jack.

Latinvex is read by multinational executives and frequently quoted by other
media such as The Wall Street Journal, Time, CNN and more.

Our premium subscribers include companies like Hyatt and SAP and law firms like Cleary Gottlieb, Jones Day, Latham & Watkins and Skadden to name only a few (see more examples here).

For only $399 a year you can immediately access all our content today as well as start getting our must-have daily news brief each morning.
Sign up now!